I saw this card and thought it was so neat. I followed the you tube and made one similar.  It’s a big card!!!   I made mine 8.25x5.5 I’m pretty sure I’ll have to make an envelope.  The creator was from the UK.-Jan Brown - her you tube title is - Tonys bay window fancy fold card #548

The bay window tucks behind the area on the right side of the card that is popped out, but it will fold flat for mailing. 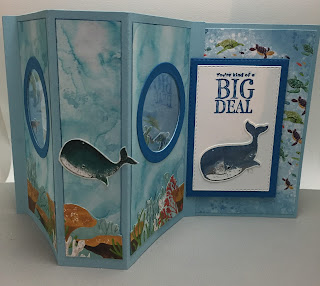 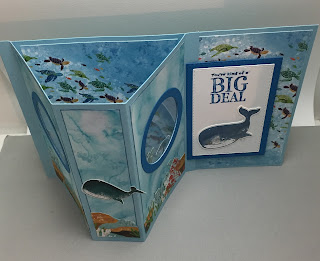 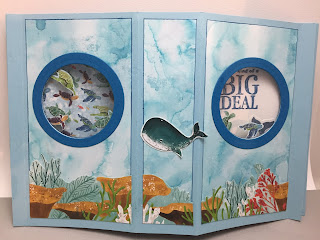 I made my own background paper then added some of the whale DSP that I cut down.

Then I decided to see if there was an A2 bay window card tutorial. Rachel Tessman had one,see below for her measurements.  After watching the basic way to make I redid the measurements for a slightly bigger envelope I had and created this dragonfly card. It's taller and the front isn't as wide so my bay window sections were more narrow. 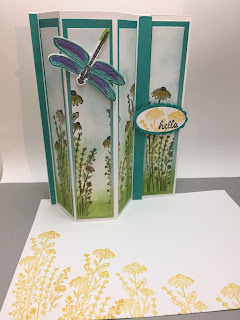 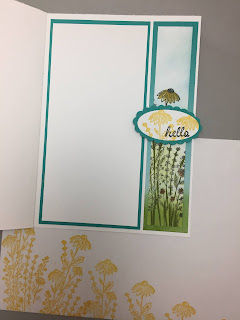 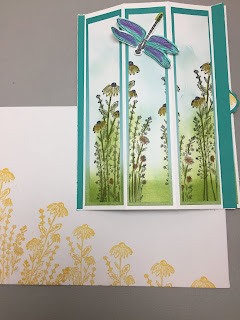 For a quick basics on how to make a bay window card: Rachel Tessmans measurements -

Measure the front of your card with this size base card it will be - 4.25x5.5

Measure the front of your card ---- basically you need 2 narrow widths on the edge and next to the middle score on the card front and with what's left you divide into thirds to make the bay window.

my dragon fly card ( 6.5 x 4.3/4) I made the 2 narrow "edges" different widths to make the bay window sections easier to measure.  I made the edge measurement slightly bigger since my pop out piece was smaller. It worked great and stands up nicely.  The top whale card is bigger and the bay window sections are wider making it nice to cut the port holes to see through.

Our technique this time is layering. I decided to not follow the sketch and just do some layering. I’m not sure this is what they really me... 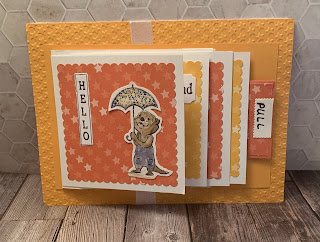 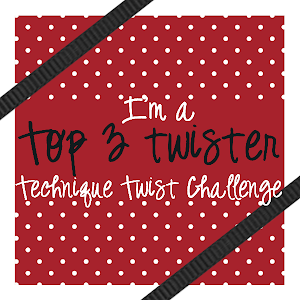